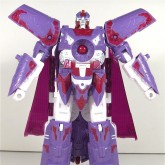 According the Ben Yee at the Transformers Collectors Club Roundtable at Botcon 2007, Alpha Trion was originally planned for a different set of exclusives, hence why his tech spec style and biography do not match those of the rest of the exclusives. It is also why he alone did not appear in the club exclusive comic.

Alpha Trion is a remold of Transformers Cybertron Vector Prime, the basic toy is the same, however the head was redesigned. According to the official Botcon website, Alpha Trion's Minicon is named Beta Maxx, and he acts as a secondary Key to Vector Sigma.

According to the Transformers Collector's Club comics, this Alpha Trion is extremely likely to be a castaway from the Shattered Glass universe, currently living in Axiom Nexus.