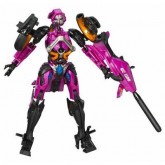 Her depiction in the Titan UK comics varies - issue #9 has her shown as her Movie incarnation, while issue #10 depicts Arcee as her Energon version (in Movie Arcee's colours).

In the alternate continuity "Twilight's Last Gleaming" storyline, Arcee was the leader of a small band of Autobots who had arrived on Earth's moon to defeat Megatron and take back the Earth. They were standing by, waiting for a signal from Bumblebee and Ironhide who were on Earth, but their presence was noticed by Starscream.