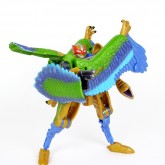 Wing-gun Dread - The tips of Arcadis' wings slide open to reveal the powerful, rapid firing laser cannons. His favoured style is to descend fast uopn the enemy, blast several shots, then ascend just as fast. He though worries over how many feathers he loses when he slides open his wings.