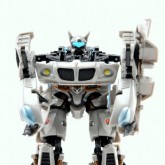 Jazz, along with Ratchet, operated a tractor beam on a planetoid near Cybertron to draw Megatron down when Megatron set off in pursuit of the Allspark to give it time to reach the Transwarp wormhole and stop Megatron getting his hands on it. They were only successful in slowing Megatron down enough to let it reach the wormhole mere seconds before Megatron did. In retribution, Megatron sent in "Devastator" (Brawl) who used a foldspace warhead to scatter the Autobots across the cosmos.

Jazz ended up on a world that he dubbed the "Information Highway", although as it turned out the world was alive, a giant trap that lured in unsuspecting travellers and consumed them. As it attempted to devour Jazz, he sent off a warning beacon to tell other travellers to stay clear of the world.
Embedded in the world, Jazz's mind wandered back to a time when he was with a friend, Clocker. They were both badly wounded because Jazz had "externalized his Spark Forcefield to keep his bodywork buff", which attracted the undying, endless rage of the Decepticon Bonecrusher. Jazz was too badly wounded to be of much help, so Clocker sent him away and fought Bonecrusher all on his own. Jazz lived, but Clocker... "by the time reinforcements arrived, there wasn't much left of him". Just like that time, Jazz's own vanity was his downfall. Fortunately, Ironhide and Ratchet picked up the warning beacon and were able to trace it to Jazz's location and save the Autobot.