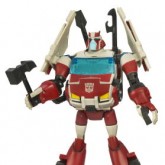 Bio as posted on the Hasbro Transformers Animated website

He is short-tempered, grizzled, and seemingly older than the ALLSPARK itself. RATCHET is the team’s medic and drill sergeant, and acts as OPTIMUS PRIME'S second in command. He is an expert healer but a little rough around the edges. Spend some time with RATCHET and you will instantly understand that he has seen it all.

ROBOT MODE POWER: "Magnets"
RATCHET'S primary power is his magnetic abilities. Two magnetic prongs that extend from his arms, they attract and repel any metallic matter or create a strong force field. RATCHET can manipulate, control, destroy, rip apart, or re-assemble anything metal with his powers. RATCHET also serves as the team’s gadget guy.

Short-tempered, grizzled and seemingly older than the ALLSPARK itself, RATCHET is the team’s medic and OPTIMUS PRIME’s occasional drill sergeant/second-in-command. He’s an expert healer, but his bedside manner leaves a lot to be desired. Spend two minutes with RATCHET and you instantly get the sense that this bot’s seen it all. RATCHET largely keeps his past to himself, dishing out tantalizing tidbits when he feels the “kids” can handle, or NEED to handle, some of the truth.

Robot Mode Power: RATCHET has magnetic powers. He can attract and repel any metallic matter or create magnetic force fields. He also uses these powers as the team’s medic, reshaping metal and circuitry, patching up any of the AUTOBOTS in the field. His talents also make him the team’s gadget-head. He can configure any tech they need and even perform robot/vehicle upgrades for all the AUTOBOTS.

Ratchet is with the other Autobots when they are captured by Starscream, and he is also there when the Quake-Maker attacks New Detroit.

When Afterburn, newly recruited to Optimus Prime's team, is sent with Ratchet, Bumblebee and Sari to Dinobot Island to tackle a rampaging Snarl and Swoop, Ratchet is charged and hurt badly by Snarl. He explains that Snarl has taken one of Ratchet's critical components, a termination inhibitor, which means even Sari with her key cannot heal Ratchet.
However, after healing the Dinobots and recovering the component, Ratchet appears fine and healthy. He reveals that the whole thing with the component was a test for Afterburn, to see if he had "what it takes". He reveals that the "termination inhibitor" was actually just a thermos of oil that he carries around with him in case he gets thirsty.