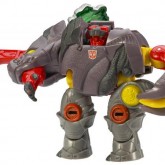 Backstop was originally going to be called Backbite.
The Japanese name, Saidos, is a play on the Japanese for "rhino", so his Japanese name is effectively "Rhinox"!

The code printed on the back of his Cyber Key is stw7. Unlocks the following information at the official Transformers Web Site:

Backstop is an ancient and wise master of martial arts. He may not look like it due to his stocky size and Rhinoceros alt-mode, but deep within this thick-skinned bot lies the beating heart of a master warrior. At one time he was just like Scourge and Leobreaker; quick to anger, full of rage and unable to keep his temper in check. He went on a journey as a young Transformer to find the meaning of life and saw the galaxy; he learned the secrets of martial arts and the teachings of the wise from ancient masters like Banzai-Tron and Bludgeon...upon his return to Jungle Planet, he was a changed Bot. He realized that fighting may be important, but it is what you fight for that makes you a strong warrior.