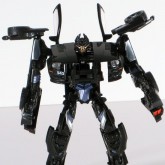 Barricade also appeared in "Starscream's Militia" in the UK Transformers comics by Titan. This comic, set after the defeat of the Decepticons at Mission City, has Starscream reanimate the destroyed Decepticons using bits of Allspark Energy culled from objects animated by the Allspark in the final battle, such as the Mountain Dew vending machine 'bot. Barricade's reanimated corpse carried its severed head in one hand, which ties in to the IDW Movie Adaptation comic, where Barricade's death at the hand of Optimus Prime involved him being thrown into a highway support pillar, his head being blasted off in the explosion that followed.