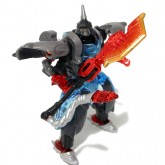 In the script for the unreleased Wreckers #4, the Battle Unicorns were legion. The elite of the post-Beast Machines army, they also acted as mounts for other Cybertronians.

A Battle Unicorn was also seen as a member of the Maximal High Council in Transformers Universe #3 alongside Airhammer, Bantor, Torca and Magnaboss.