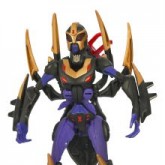 In Transformers Animated: The Arrival #4, Blackarachnia's pose on the final page of the issue is a homage to Marvel Comic's Spider-Man.

The animals that Blackarachnia sees at the end of "Predacons Rising" are homages to the original Beast Wars cast - Rhinox, Rattrap, Cheetor and Optimus Primal.

Reflecting Blackarachnia's tinkering with Transwarp in Transformers Animated season 3, Blackarachnia is referred to as a scientist in the Allspark Almanac.

BLACKARACHNIA is a freak among DECEPTICONS. Some time back, an encounter with the ALLSPARK caused her to fuse with an organic spider, turning her into a techno-organic hybrid of animal and machine. She despises this new form, especially on Earth, where her giant spider mode doesn’t exactly allow her to “blend.” BLACKARACHNIA will do anything to find a cure for her condition and doesn’t care who she has to step on to get it. Obviously the ALLSPARK and its Autobot protectors will play a big role in her schemes.

Robot Mode Power: BLACKARACHNIA has multiple eyes and eight limbs – two of which are skinny, pincer-like “spider limbs” that jut from her back and arc over her shoulders. The pincer limbs can strike like scorpions’ tails, stunning prey with her venom, or spraying spider-like webs. She also has the ability to download and temporarily absorb other Cybertronians’ powers.

Vehicle Mode Appearance: BLACKARACHNIA has no vehicle mode appearance. Instead she changes into a giant techno-organic black widow spider.