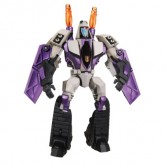 The “Joker” of the DECEPTICONS. An unpredictable “triple changer” multiple personality bot, driven mad by his constantly shifting appearance. He has three personalities, one for each face, and his power depends on the face: Icy, cold and calculating; Hothead, short tempered, volatile; and Random, completely bonkers.

Robot Mode Power: BLITZWING is a “triple-changer”—that is, he has three modes (one robot, two vehicles). Plus he has three faces, each with its own personality. His power depends on which face he’s showing. Heat/flame, cold/ice or completely random.