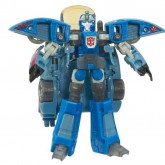 Cyber Key Code: d0y2
Unlocked information from http://www.transformers.com:
This toy is actually an homage to the Generation One super-speedy Transformer Blurr. Blurr was introduced in 1986 in the original theatrical release of Transformers: the Movie and served under the command of Ultra Magnus and later Rodimus Prime. Blurr is the fastest Autobot known and was known for talking too fast for anyone to even understand what he was saying. Blurr also was in almost every episode of the Generation One TV series season three, and this is his first reincarnation into a modern Transformers toy line!