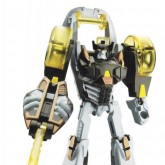 Cyber Key Code: s5f3
Unlocked info from http://www.transformers.com:
BRAKEDOWN is one of the oldest TRANSFORMERS on Velocitron. He has been around almost since the first Cybertronian settlers arrived on Speed Planet carrying the Cyber Planet Key. This veteran racer was the Transformer that trained Override for her races when she was first brought on line. It was BRAKEDOWN that made sure she became leader of Velocitron -- the Speed Planet! In fact, BRAKEDOWN has been training and racing with the fastest and brightest speed stars of Velocitron for close to a million years!