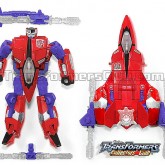 Breakaway spent a long time on Earth, waiting, guarding a pool of exceptionally pure Energon, until the dimension-hopping Skyfall and Landquake found their way to him. Ipon meeting them, Breakaway, at the urging of the Caretaker, joined the duo on their journey to locate "the others". The three travelled through a portal and arrived on a parallel Cybertron that had never known war, in a city called Axiom Nexus.
After going through processing in Axiom Nexus, the three met Alpha Trion, and as Trion took them to his lab, Breakaway was jumped by agents of the Transtech Shockwave. Shockwave believed that he could learn a great deal about the mysteries of the Transformers from Breakaway, but to do so, would need to dissect Breakaway, and so he petitioned Transtech Megatron for permission to do so.