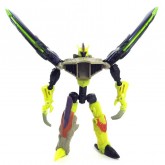 A special version of Brimstone was available at Walmart, containing a DVD with an episode of “Cybertron” as a promotion. However, the character of Brimstone did not even appear in that episode.

There were also plans to repaint Brimstone into a Transformers: Timelines Divebomb figure, which would be a convention exclusive, but the figure was never produced