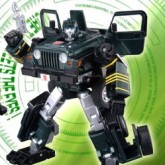 Bio translation originally from the Fan to Fan website.

Almost 20 years have passed since the first contact between Transformers and humans, and situations around the world have changed tremendously. Humans and Autobots have now formed an invaluable community bound by a common destiny. Through a mutual fusion of their technologies, they have revived a new generation of warriors, Binal-Tech Transformers, and successfully achieved phenomenal military results against the threat of the Decepticons, who are stronger than ever before. At the same time, Megatron has finally launched a war of conquest on Cybertron, where the Decepticons have held superiority for some time, in order to wipe out all Autobot resistance forces. As the renowned warriors of the Autobot forces rush out into violent combat, the Earth, their vital source of energy, is exposed to even greater menace as a target of capture for their enemies. thus the fate of Earth and the Autobots is entrusted into the hands of the Binal-Tech Transformers, their warriors of hope!