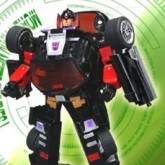 The EDC and newly reformatted Binaltech Autobots were able to drive the Decepticon forces out of the solar system. In full retreat, the Decepticons broke into small groups and went into hiding on various planets across the galaxy, to make repairs and wait for a chance to strike back.

Meanwhile, back on Earth, the evil scientist, Dr. Archeville, who was determined to break the Earth/Autobot alliance, became human's greatest threat by forming a secret organization dedicated to the cause. Believing the key to dissolving this alliance is to destroy the Binaltech project, seen as the symbol of Earth/Autobot alliance. The existence of this secret organization came to the knowledge of Starscream, who was in charge of the assault on Earth, he made contact with Archeville, both believed they can use the other for their own goal. Built on distrust and evil intent, a dark alliance was thus formed as they worked together against the common enemy, EDC and the Autobots.

Using a Hypnotising device developed by Dr. Archeville, know as "Hypno-Chip" and combined with "Cerebro-shell" of the psychological warrior, Bombshell a new advance method of brain washed technology was created. With it they were able to infiltrate and take control of various scientific institutions as well as industrial cities without anyone knowing. They were also able to convert several EDC personnel into spies working for them. This allowed them to obtain the plans for BT and perform it on their damaged Decepticon warriors, who were now reactivated to be as powerful as the BT Autobots. The general population, still unaware that some of them now lived under the control of this dark alliance and even helped to revive their enemies, is about to realize one of their worst fears, the once hope of humankind, Binaltech, has now become their greatest crisis!

Bio and story translations originally from Fan to Fan website.