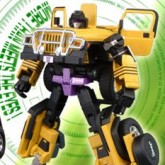 Based on our investigation so far on the incident behind Decepticon warriors reformatting using BT technology, we have uncovered that it is linked to a secret organization made up of humans who called themselves the "Concurrence". The objective of this organization is to destroy the alliance of humans and Autobots, made up of a various villiany groups believed to have united through social clubs, heading the group are two notorious terrorists leaders, Count von Rani and General Krieger, and were financially backed by the vengeful Lord Chumleigh and Shawn Berger Jr, who claimed life was destroyed by the Transformers. While it seemed foolish that this group of people with stature would associate themselves with the Decepticons, it seemed that someday they intended to rid of all Transformers, their ultimate agenda would be to turn the Solar System into a Robot-Prohibit resort area. It has been confirmed that none of the BT Project members are in the Concurrence group. This is why brainwashing technics were used to control some of the BT project members, making them victims in this incident. We must contact Ultra Magnus of Cybertron City immediately and inform him about this. He must locate and find a way to neutralize the brainwashing device as soon as possible. My transmission will end here, they will be breaking through the door soon...please tell my family that I will be spending a bit more time on Moon Colony for now...

Swindle's body frame was actually made by Central City Institute of Technology, intended for the next Autobot warrior. However, the completed BT-09 body as well as the project team involved were commandeered and was made to use for Swindle. Several functions such as Force Barrier Generator and ECM transmitter panels that was initially built into the BT-09 frame were not compatible with Swindle's initial specifications and therefore were left on his body in an offline
state.

Swindle's handheld weapon, the Gyro Gun is able to disrupt the balance of a Transformer's central core system irregardless of the mode they are in. In addition, to that, his main weapon, the Scatter Blaster, is built into his arms looking in the form of the car's engine unit. This allows him to fire explosive scatter shots through the front grille when in vehicle mode, and from his 2 arms when in robot mode, causing wide area effected damages. The weapons on the Binaltech warriors (Autobots) will only be equipped by EDC's weapons division after they have been transferred to Cybertron City. Since Swindle's body, BT-09, was taken before the startup test and transfer, it did not get equipped with any weapons issued by EDC. Therefore, Swindle has to construct and install his own weapons from his own hidden stash of resources.

As soon as the units were stolen, EDC deleted the registrations of these units, blocking the access to the charging facilities for recharging the "Electron Cell" within the BT units. Looking for an alternate power source, the Decepticon BT units changed to a stable/low output power soruce known as "Exponential Generator".