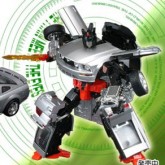 Bio translation originally from the Fan to Fan website.

Story of BinalTech Chapter 7 - Beast in the Machine

Far from Earth, on Planet Cybertron, the main Autobot forces under Optimus Prime played out a furious battle to smash down the war of conquest instigated by Megatron. The war situation continued to fluctuate back and forth, until one day they abruptly suffered a decisive strike by the Decepticons which disrupted that balance. This was the "Unleasher," a mental attack using the primitive telepathic creatures of another world. This caused the Dinobots, the Autobots' foremost source of combat power, to lose control one after another, becoming ferocious beasts that did serious damage to their allies' strength. To bring this calamity to a halt, the Autobots had no choice but to destroy the rampaging dinosaurs themselves. Afterward, the diagnosis results for Grimlock, who was the only one to return to his senses, confirmed that a mysterious mental influence had caused a "wild instinct and primitive urge" program subroutine, which is possessed by Transformers with a "beast mode," to run amok. The operation to remove this telepathic imprint was rough going, and there was a shortage of materials for repair work, so the Dinobots' return to the lines of battle seemed hopeless. However, the engineer Wheeljack, noting the fact that vehicle-based Autobots were not influenced by the imprint, proposed an alternative plan of having Grimlock restored by Earth's BinalTech project until a reliable treatment could be found. And so, with Grimlock's cerebral core in hand, Wheeljack rushed straight to Earth.