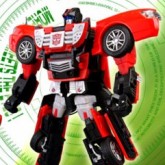 Overdrive’s old body was damaged so severely that his central processing unit required a long time for getting repaired, therefore the development was started very late as compared to other first run of BT units. The development of the body frame for BT-12 was executed by Honda’s Wako Basic Technology Research Center, with the full commitment of a team that has been working on developing humanoid robots a little longer than others did, therefore they were able to accomplish their task earlier than expected. There are several BT-12 prototypes in existence, which will be involved in the “Bodyshop Project” that was initiated by Wheeljack.

The Ballistic Shield, formed by a coat of high-density polymerized Durabyllium, is able to block most kinds of physical projectiles. In addition, the multifunctional Omni Blaster that was developed by the EDC now incorporates all the capabilities of his three former weapons, the Neutron Blaster, the Electron Cannon and the Plasma Beam Rifle, which can be switched between at will.

Due to the humanitarian support regulations imposed by the contract with the developing manufacturers that joined the BT project, any installations of internal armaments within the vehicle mode were discouraged, even the double attack mode transformation feature had to be sacrificed. In exchange, the vehicle’s rear section (or the shoulder and abdomen in robot mode) is now equipped with a field propelling machinery, allowing travels with extremely high speed on land and even transonic flight for brief periods of time and also providing him with a special ability to perform various feats that require high agility in robot mode.

The reports of the main Autobot forces having a tough stand on Cybertron was an additional burden to Ultra Magnus, who led the Earth forces. While fighting back Decepticons’ assaults time and again, he continued to supply Cybertron with reserve energies. It was during this time that several of the defense systems set up by the strategist Overdrive started to break down frequently due to some unnatural coincidences. A major crisis eventually occurred when one of the transport shuttles loaded with Energon cubes that were intended to supply the main forces on Cybertron was destroyed just before launch. All this was actually the work of the Decepticon warrior Ravage. In a sinister attempt to change the future, he worked in the dark and carried out a series of experiments in order to alter history. Naturally, no one else besides Ravage knows the truth.

But Overdrive, experienced in using a Quantum Dial frequently for travelling between parallel universes, was able to detect a “Reality flux” at the position where the shuttle exploded, the same phenomenon he also feels whenever he performed a dimensional jump. To Overdrive, this was without a doubt the concrete proof that someone from outside their current time frame was attempting to change history.

He instantly informed the Alliance about a possible “Temporal attack” and suggested additional security measures. But if what he suspects is true, how is it possible to counter such a threat posed by an enemy with this kind of supreme advantage?