The Body Shop Project is a plan that utilizes the GT technology to create duplicates of a TF, thus achieving the objective of significantly increasing the survival rates of the Autobot warriors. The BT-15 model, built by Honda, was initially designed to become Prowl’s duplicate body, “Prowl 2”, in the aforementioned Body Shop project (*). However, because the original body was destroyed before the GT network was activated, the BT-15 model now functions as his Primary Unit.

In vehicle mode, the exterior has been programmed with police car patterns from police forces worldwide, allowing him to change his appearance if needed. In addition, utilizing functional plastics, the interior can be modified as well.

BT-15 “GHS” unit is a blue bodied civilian car. The BT-15 was developed to be a Generic Host Shell that allowed no limitations in regards to the type of user. Normally, it will be on standby as Prowl’s backup GT unit, but if situation requires, it can be reactivated as emergency duplicate for other Autobot warriors such as Streak or Tracks.

While investigation for remaining Decepticons continued in various regions of the universe, on Earth, the production of the duplicate shells was progressing: likewise, the transplantation of each Autobot personality data was nearing a finish under the Body Shop Project. Meanwhile, an emergency comm link was received from Prowl who was investigating Decepticon activity near the rings or Saturn, stating a situation of heavy enemy pursuits. “His fated scenario has begun,” sensed Wheejack. Though reluctant due to the long distance, he decided to activate the GT system, successfully transferring Prowl’s life core into subspace, the very moment enemy forces led by Laserwave, breached the spaceship’s hull, attacking Prowl. But just when they thought it was safe, due to the unstable nature of the subspace link, the connection was suddenly severed and Prowl’s separated core unit signal lost! Unable to do anything to locate the lost core, Wheeljack was overcome with helplessness. The next day, Chip Chase thought back, in front of the BT unit once meant for Prowl. “20 years ago, we met up through your online communication. Your battle computer was damaged, and I substituted-“ Suddenly, something flashed across Chip’s mind. “Your knowledge and your personality are already installed within this unit. If that’s the case…” Calling Wheeljack and Ratchet, he said, “I believe that some day he will come back. But right now, the world needs Prowl’s capabilities. Therefore, let us light this unit with the spark of life. Please initiate preparation for mind transfer.” 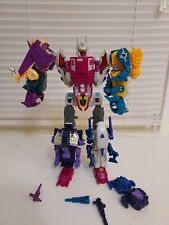 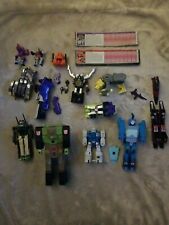