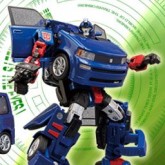 BT-16 Skids marks the first case where the BT body was used purely for the purpose of an upgrade, without any special factors forming the background during the “birth” process. To launch it into practical use, the Toyota Group and the EDC Advance Technology Development Agency jointly developed a body capable of self-repairing, with installed nanomechanical antibodies, material integrity maintenance and other functions, including a shell that enhances the internal systems of a sentient robotic life form. Unless it is destroyed in battle, in theory the body has a durability that can withstand thousands of years of use.

Due to difficulties encountered when trying to increase the production run, the BT-16 model does not have the standard GT clone bodies. Instead, it is equipped with a function which, in moment of danger, allows the life core to be transferred to an external reception unit using a subspace channel.

Portable weapon is a liquid nitrogen rifle that can fire cold particles of -200 degrees C to a range of 190m.

Thanks to the lighting strike operation conducted by Prowl and Overdrive, the mastermind behind the series of history alterations, Ravage, was captured at long last. But inside his secret base, Ravage told them, “Unfortunately, even though I would like to congratulate you, your efforts are to no avail. Look!” Shown on the monitor was an enormous celestial body moving towards Cybertron. “That is Unicron! The planet eater and Chaos Bringer!” Those words marked the beginning of a nightmare. Cybertron’s defense fleets were destroyed within an instant, and the moonbases served as food for the monster planet. Right after that, countless robot soldiers who appeared to be under Unicron’s command swarmed in, and may warriors sacrificed their lives trying to defend their headquarters. “So far, so good,” Ravage said, “But do not let Optimus die. The only chance to stop Unicron lies within the Matrix which your commander carries.” Optimus Prime, now realizing the true intention behind Ravage’s sinister scheme, reached a decision, and together with Ultra Magnus, he boarded a shuttle, heading towards Unicron. “Even though this future might be hopeless, we still have duties to attend. Order Skids on Earth to initiate ‘Operation Distant Thunder’!”

Operation Distant Thunder is a last resort to counter the enemy’s alterations of space and time by sending back Wheeljack’s memory data to a point in time before history was altered, in an attempt to warn their earlier selves. This last resort can only be put into effect at a specific location on Earth, namely Dinobot Island, where a time-warp had been created at a time when energy was losing its balance there. After many years of research, Skids had managed to find a way to control the warp to some degree. Fully aware that what his is about to do is going to intervene with the flow of time, Skids keeps telling himself, “This is all for restoring it back to how it was supposed to be.” If everything goes well, the Body Shop Project could even help to erase all the tragedies that happened in the “Original History”. As he operates the energy converter installed on the remote island, trying to recreate the warp, Skids’ sensor suddenly alerted him of a squadron of Decepticons approaching his position at a rapid pace. Will he be able to carry out Operation Distant Thunder in time?