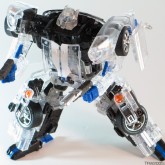 Following the battles surrounding altered history, a world was born in which the Binaltechs would influence the fate of the future. However, this was an extremely stormy period for the Autobots, with Megatron wielding power and in total domination of Cybertron, and the newly arrived Nemesis Prime moving in secret on Earth. Optimus Prime worried that the Autobots were pinning all their hopes of survival on the Alternity, super-beings who would evolve from the Binaltechs to appear in the distant future, as a promise of their survival. There was no proof that this information from the future would save them in the present... but they still needed hope. And in order to break the deadlock of this difficult situation, he himself believed that they would have to borrow strength from the future once again, reluctant though he was to do so. Prime summoned Prowl and the rest of the tactical group and conveyed to them one of the counter-attack methods he'd seen in Ravage's memories of the future.
The perpetrator who has brought forth these circumstances, Ravage had corrupted some vital information before he was captured and interrogated by the Autobots. Even if the flow of history was changed, his knowledge of the future was still useful, and the Autobot scientists devoted all their efforts to reconstructing the data. As a result, they succeeded in recovering several valuable pieces of information, the handling of which was entrusted to Optimus Prime.

while Megatron's solar system-encompassing net contracted, Mirage, concealed in an enemy supply ship bound for Cybertron, fully displayed the power of his enhanced electro-disruptor, boldly debarking from the ship's cargo bay. With no time to indulge in the deep emotions he felt at alighting on the surface of his home world, he set his sights on his designated destination, coordinates Omega-01. The trump card that could save his companions and the Earth from its predicament, even put an end to all the fighting, rested there.
Half a light year away, a camouflaged ship bearing Tracks, the four Smokescreen GTs, and a human work party waited on standby. They were there to provide a diversion if Mirage's infiltration operation were discovered. The object that lay at Mirage's target coordinates was a mysterious mechanical device that had been hidden deep within Cybertron since time immemorial. According to what was recorded in Ravage's information, when the flashing lever set up in this chamber was pushed down, every Transformer in the galaxy would cease functioning. They had been unable to learn from the incompletely recovered data why such a fearsome device, which apparently would be effective even across space-time, existed.
"If the device is activated, the Autobots will be frozen up as well, right? Are you all okay with that?" one of the Earthling crew inquired.
"Right now, it's necessary to end the fighting," responded Smokey 7, one of the Smokescreen GTs. "What happens afterwards in in your hands."
"All we ask is that you reactivate us after you've done away with Megatron and his troops," Smokey 2 interjected cheerfully.

When Megatron attacked the EDC's Mars base, a black shadow had forced its way through the firing lines of both sides. EDC member Marissa Faireborn witnessed Nemesis Prime standing in Megatron's way.
"I will not let you trample my garden."
"An Earth machine mimicking Prime's visage dares to wear the Decepticon sigil? I shall crush you for such manifold insolence!!"

Meanwhile, Mirage had reached his coordinates and removed the traps set up by Ravage, and at last stood before the instant-freeze machine. It seemed that even Ravage had held this device in reserve as a trump card. "That indecision will be their doom." Placing his hand on the lever, which was emitting a strange sound, Mirage gazed into its bewitching glow. "This will make the universe quieter than ever before." Gathering his strength, Mirage pushed the lever down.
Immediately, an unseen force spread out from the instant-freeze machine across the galaxy, and Transformers on Cybertron and everywhere else in space simultaneously came to a halt. Even Megatron was frozen solid on Mars in a grappling stance.
Even as the Earthlings on the camouflaged ship monitored the effects of the freeze machine, they were faced with an anomaly: Tracks and the other Transformers near them still continued to move. "This is Mirage. The operation... appears to be a success. Our enemies on the surface are all apparently frozen... but I don't understand. I heard that device would stop all Transformers, but it's having no effect on me. It seems it was a little oversold."
Checking the situation, Prowl soon discovered the true nature of the anomaly. "Only the Binaltechs are active!" To be precise, the translink mechanism which separated their life cores in subspace had acted as a filter, isolating them from the freeze machine's influence. Ever since Project: Bodyshop had been carried out, nearly all Autobots had been equipped with translink nodes, so their allies had suffered only the slightest damage. The Autobots had been prepared to engage in mutual destruction by this desperate measure, but miraculously, they had achieved a turnabout victory.

"So I was saved by Binaltech?" Nemesis Prime pushed past the frozen Megatron before him and called out to the only other functioning Transformer, Shockwave. "We'll carry as many of our comrades as we can before they're taken by the Earthlings. Hurry!" Shockwave was momentarily bewildered, but he immediatly summoned an escape ship and worker drones, in accordance with logic.

Nemesis Prime considered matters as he watched the Earthlings evacuate from Mars Base. "If the Binaltechs are eventually going to produce some enormous power, I want to see it. For that to happen, I will have to ignore the continued existence of Earth civilization. Still, it's a trifling thing to defer the destruction of a single star system in an entire galaxy that will soon be mine!"
He calmly boarded the Decepticon ship and sat down silently on Megatron's throne.