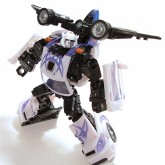 Bugbite was the leader of a crew of Decepticons who arrived on Earth, closely followed by a band of Autobots under Ultra Magnus. While on the surface he swore loyalty to Bludgeon, Bugbite's presence on Earth was for more personal reasons - he sought revenge on Megatron, who he deemed responsible for the destruction of his own world. His charisma and command over the Decepticons was due to his use of modified Cerebro Shells. However this did not save him, as Bugbite was brutally killed by Megatron, who fired his fusion cannon at point blank range, obliterating Bugbite's head.