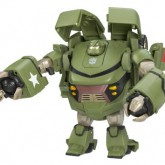 Every team needs its "muscle" and BULKHEAD is it, designed primarily for demolition in battle he is your greatest weapon. In everyday situations, hide your breakables. He's not overly clumsy but he doesn't know his own size or strength. At first, BULKHEAD comes off as a dumb jock, but scratch the surface and you will realize that he is a softy at heart.

ROBOT MODE POWER: "Wrecking Ball"
A massive wrecking ball comes out in place of BULKHEAD'S right hand. It is tethered to his arm by high-tensile cording. He can send it flying for a long distance. He uses his wrecking ball for hitting, crushing, baiting, ensnaring, and over-all DECEPTICON bashing.

Every team needs its “muscle” and BULKHEAD is it. Designed primarily for demolition, BULKHEAD is a bull in a china shop, whether he wants to be or not. In battle, he’s your greatest weapon. Everywhere else… well, hide the breakables. He’s not overly clumsy, but he’s like a big overly enthusiastic dog who doesn’t know his own size or strength. BULKHEAD has a natural curiosity about humans and their culture. He’s especially interested in art, something that doesn’t exist on Cybertron. On some level the creative urge is an attempt to compensate for all the destruction—deliberate or inadvertent – that he causes. Problem is, most of his “creations” either fall apart, don’t look a thing like what he says they are, or are just plain ugly. Not that anyone would ever tell BULKHEAD that to his face.

Robot Mode Power: BULKHEAD is easily the strongest of the AUTOBOTS. That combined with battering ram arms make him the ultimate “Demolition Bot.”
Bulkhead's hands can retract into his arms and form massive mace weapons, although in swinging these around, Bulkhead can often cause more damage than his target.

Even Bulkhead was unable to stop Starscream overrunning the Autobot base in Transformers #17. With the other Autobots, he had to be rescued by the Dinobots.

In issue #3 of the short-lived Titan UK Transformers Animated comic, Bulkhead attended a basketball game with Sari, Prowl and Afterburn. Naturally Bulkhead got the wrong idea of "learning from the game" instead picking up bad habits from the crowd such as shouting at the players and honking airhorns.
His naivete also showed when he assumed the people of New Detroit would not turn against the Autobots just because Crossroad told them to hand themselves over or the people would suffer the consequences - seconds later, an angry crowd appeared and the Autobots had to run for it.