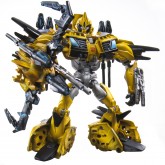 Tales of the Beast Hunters - Chapter 1

With the threat of Predaking looming over them all, every Autobot dedicates himself to finding some means of battling the Predacon overlord. But it is the scout Bumblebee who discovers the key to victory. Buried deep within data recovered alongside one of the Iacon Relics he finds evidence of a derelict transport starship - a courier packed with weapons more ancient than any relic yet recovered - set adrift ages ago among the asteroids girdling Earth's solar system. With no other way to reach the ancient ship, he contacts Wheeljack, hoping the Autobot mercenary can provide transport and - if it turns out to be a trap - an extra blaster.