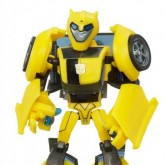 Bumblebee installs a custom horn in episode 07. Thrill of the Hunt, which plays the "More than Meets the Eye" jingle. Other car accessories he sports in that episode include fluffy dice, a hula girl, and a pine air freshener (which he comments he has no idea what it does).

The “kid” of the team, easily the youngest and the least mature of the AUTOBOTS. He’s over-eager, over-confident and constantly overcompensating for his diminutive stature. Fast-talking, wise-cracking, scheming and hyperactive, BUMBLEBEE is not nearly as cool as he imagines himself to be. Then again, nobody could possibly be as cool as BUMBLEBEE imagines himself to be. He’s a total showoff, always acting on impulse and rarely considering the consequences. And he’s always getting in way over his head, although most things are way over his head. But don’t mention that to BUMBLEBEE; he’s very sensitive about his height.

Robot Mode Power: BUMBLEBEE can create electric force “stings,” allowing him to stun enemies or blast his way through whatever’s in his path. He’s also the fastest of the AUTOBOTS, in both vehicle and robot mode.

BUMBLEBEE is the "kid" of the team, easily the youngest, and most immature of the AUTOBOTS. He’s a showoff and acts solely on impulse; he behaves like a rebellious teenager with a sarcastic, wise-cracking, attitude and disdain for authority. As far as his superhero status goes, BUMBLEBEE naturally digs the spotlight and will do anything to have it shinning brightly, and exclusively on him. His big mouth, brash tone, and "bring it on" attitude sometimes get him in over his head.

ROBOT MODE POWER: "Stingers"
Two sparkplug- looking cannons allow BUMBLEBEE to send electric force blasts that stun his enemies or blast away through whatever’s in his path. BUMBLEBEE not only has super-electric stingers, but he is the fastest AUTOBOT in both robot and vehicle mode.

Bumblebee as always is a key member of the Autobot team. In Transformers #17, he is with the other Autobots when they are captured by Starscream and his clone army.

In the UK Animated Comic Issue 1, Bumblebee and Sari exchange quips with the human villain Quake-Maker. Once Afterburn arrives on the scene, Bumblebee is the first Autobot to join in the fight, followed swiftly by Bulkhead and Ratchet.

In spite of being impressed by Afterburn in that story, Bumblebee is still not totally convinced. In Transformers Animated #2, he is apprehensive about taking on the rampaging Swoop and Snarl with only Ratchet, Sari and Afterburn for backup initially wishing that Bulkhead, Prowl or Optimus was there. During the fight with Snarl and Swoop, Swoop drops Bumblebee in a mud puddle, annoying Bumblebee who comments he'd just had his monthly wash. Later, Bumblebee uses his speed to distract the rampaging Snarl and recover one of Ratchet's components from him, then working with Afterburn, uses Sari's Key to cure Snarl of the rage virus that was making him rampage. After this, Bumblebee starts to accept Afterburn more.