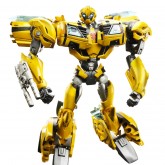 In the encore broadcast of Transformers Prime episode 53, Darkmount NV, one of the "Autobit" captions revealed that Frank Welker read actual dialog for Bumblebee, which was later dubbed over with his beeps by the sound team. So while Bumblebee does not speak for the majority of the show and Frank Welker is not credited as Bumblebee's voice, Frank does in fact put the words in the mouth of Bumblebee in a very unusual fashion.

In Deadlock and Predacons Rising, Bumblebee regains the ability to speak, and is voiced by Will Friedle.