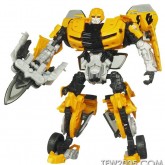 Redeco of the original 2007 Camaro Concept Bumblebee in a rally style. The tampographed details along the side of the vehicle are all homages to different Transformers series past: