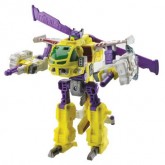 Cyber Key Code: df58
Unlocked information from http://www.transformers.com:
Buzzsaw is actually an older Transformer name that dates back to Beast Wars! In 1995, Hasbro created an all-new line of Transformers toys called Transformers: Beast Wars where old characters were reimagined into animals. Megatron became a Dinosaur and Optimus Primal was a gorilla. One of the characters that was never in the TV show, but appeared in product was Buzzsaw – a yellow jacket wasp. This toy, which originally was used in Transformers: Armada as Cyclonus, was given a new head mold that resembles the Buzzsaw toy from 1995, and a paint job the hearkens back to the colors used on the Beast Wars toy too!