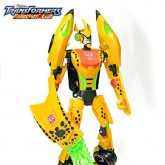 A slightly different version of Cheetor's bio was posted online when the toy was unveiled, possibly as the original proposed bio:

Cheetor loves the thrill of the chase. When his turbo sensors lock on to the taillights of a fleeing Decepticon, and he pushes his accelerator to the floor, Cheetor's head gaskets receive a rush like nothing else! The only problem is that sometimes he gets a little too focused on his games of cat-and-mouse. His optics lock in on the perp, causing his surroundings to fade into a blur as he races after the bad guy. Street signs, traffic flow, even that unfortunate 'bot caught crossing in his path! Nothing else matters to him during his race to catch the bad guy. That's no doubt the reason that the Precinct is constantly rotating Cheetor from partner to partner; no one in their right processors would want to get stuck with an eager rookie like Cheetor watching their back!