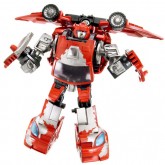 The eternally surly Cliffjumper was distrustful of the mysterious Skyfall as soon as he appeared on Earth. He was assigned to watch over the wanderer, pulling his gun on Skyfall as a traitor when Skyfall tried to help his Decepticon counterpart, Landquake.

Cliffjumper was caught in a cave in and rendered unconscious. When he came to, he saw Skyfall, Landquake and Breakaway heading through a strange portal and followed them, but instead of ending up in the Transtech Universe's Axiom Nexus, he instead found himself on a very different Cybertron to the one he knew, complete with a ruthless, bearded Hot Rod.

As it turns out, Cliffjumper had stumbled into the Shattered Glass timeline, a divergent reality where Autobots were evil and Decepticons heroic. Cliffjumper learned the truth too late to save himself from the cruel Optimus Prime of that reality. Shot to pieces, he was left in Cybertron's RAD Zone where he was rescued by the Constructicons of that universe. After regaining conciousness, the Shattered-verse Sideswipe filled him in on the history of that reality, and Cliffjumper, still uncertain of himself, agreed to help Megatron stop Optimus Prime launching a vast warship called "The Ark". Cliffjumper gave the Decepticons the formula for his glass gas, which allowed them to make the Ark's launch platform extremely brittle. However, Cliffjumper remained uncertain of his allegiance, until Megatron took a bullet intended for Cliffjumper. Realising at last where he belonged, Cliffjumper destroyed the launch platform, and left with the Shattered-verse Megatron to fight for a better future for that version of Cybertron.