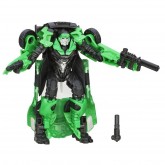 Initially rumored to be named Slingshot. A leaked call sheet in August 2013 first dropped the name Crosshairs, at the same time that the Corvette Stingray was on the set of the film's shooting, leading to the assumption that the character was named Crosshairs. The leak of a list of upcoming products in late October 2013 confirmed the name Crosshairs, with Slingshot being the codename / a placeholder name during production.