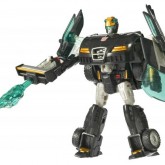 Cyber Key code: d9f2
Crosswise was originally going to be called Smokescreen, the name was changed fairly late on so his first appearance in the Cybertron TV show (later redubbed) referred to him as Smokescreen instead of Crosswise. The reason behind the change, ironically, was so the toy could be repainted as a G1 Smokescreen homage named Smokescreen in the line's final waves!