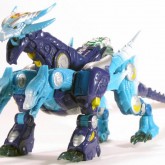 "This color for a dragon is not a new thing for Hasbro! During the Beast Wars era, there was a massive Megatron figure that turned into a ferocious red dragon. Two years later that figure was painted into an ice dragon and released as Cryotek! As an added bonus, the name Cryotek is from an old Hasbro toy line called “The Visionaries” from 1987!!"