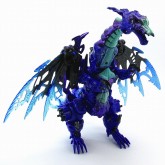 Cryotek's packaging did not include a bio for the toy. The official BotCon website, however, included a full bio for the character based on the style of the Marvel More than Meets the Eye profiles, which incorporated elements of the unused Bio and Tech Specs from the toy. The first paragraph is represented here, the rest can be read at the official Botcon site:

Cyrotek has made no on-screen appearances, however, he has seen considerable use in fiction produced by the conventions and Collector's Club. In the fan-made film, Theft of the Golden Disk, Cryotek is shown as the mastermind behind the theft of the disk, until Megatron betrays him and he is arrested. He is left asking to speak to his lawyer as Megatron blasts off on board the Darksyde and into the Beast Wars.

Cyrotek, and his partner Kro, would also appear in 3H's The Wreckers comics and Fun Publication's text story "The Wreckers Finale II".