Dispensor was so-named at a Hasbro panel at Botcon 2007, when Hasbro was asked about the possibility of "the Mountain Dew Bot" getting a toy, one fan shouted out "Dispensor" and the name stuck.

In the Titan UK story, Starscream's Militia, Dispensor's "spark" was acquired by Starscream in the immediate aftermath of the battle of Mission City to revive the fallen Decepticons Blackout, Barricade and Brawl. Two sparks were left over and kept by Starscream as he made his escape after the battle, it is possible that Dispensor's spark may have been one of those two. 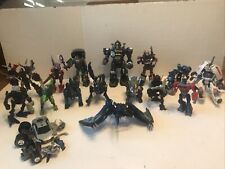