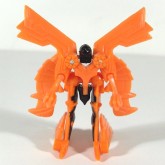 Divebomb took part in the bombing mission against the evil Optimus Prime's Ark warship, dropping the glass gas bombs that would weaken the launch pad enough to allow the rest of the Decepticons to destroy it. Later, during the battle, he attacked the mighty Grimlock with his Predacon brothers.