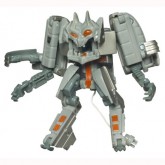 Ejector first appeared in Mountain Dew commercials during the 2007 Transformers Movie promotional period, "Transform Your Summer". He would steal his owner's Mountain Dew while the owner's friends had their backs turned. The friends thought that the owner was having a mental breakdown as he continued to repeat "Toaster's got my Dew."