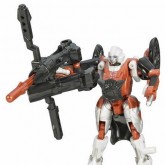 Elita-1's bio referring to her as the "first female Transformer" is a reference to the fact that she was one of the female Autobots in the Generation 1 episode "The Search For Alpha Trion", the episode that introduced the concept of female Transformers. She was not the first one seen in that episode, nor was she the first one of the female Autobots from that episode to get a toy - Chromia was released as a Botcon exclusive in 2005, and was also a remold of Energon Arcee!

Elita's depiction in the UK Transformers comic is inconsistent - in issue #9, she resembles her Movie toy, while in issue #10, her head looks a lot more like her classic Generation 1 head.

Elita-1 is a member of Arcee's Autobot strike team who are standing by on the moon to liberate Earth from Megatron's tyranny, once they get the signal to attack from Ironhide and Bumblebee. She's spoiling for a fight, and will get one now that Starscream has tracked down her and the rest of Arcee's team.