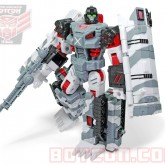 When Flak was first revealed on the Official Botcon 2009 website, the following short bio was posted accompanying the images of the toy:

An experienced 'alien fighter' who forged his career in the Cybertronian Revolution, Flak is a fearsome opponent. Space pirates, mutants, transorganics... Flak has fought them all, first as a security officer, then as an explorer, and finally as a shock trooper under Thunderclash's command. Off the battlefield, combat doesn't interest him; it is his job, he does it when needed and he does it well.