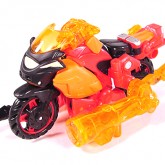 Flareup appeared in the Botcon 2008 script reading, "Bee in the City". She was a security officer at Axiom Nexus, enforcing the city's policy of "No Megatrons, no Primes, no cosmic Macguffins, and no soliciting". Apart from the occasional day when things just seem to go completely wrong (like, say, a certain purple dinosaur going by the alias "Joe Convoy" getting his claws on Sari's Key) she prefers her life in Axiom Nexus to the one she left behind "because who wants to be shot at all day?"

2005 Boards member Fairlady_Z played the role of Flareup, having won the Transformers Idol awards. (2005 Boards Moderator and Internet Personality Vangelus won the men's half of the contest and voiced Shockwave. All other characters were voiced by their respective voice actors, with Marty Isenberg providing the remaining voices such as Isaac Sumdac).