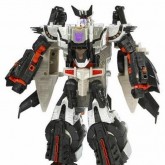 Orange Decepticon Key #l65x
Unlocked information from http://www.transformers.com:
If the Autobots thought Megatron was tough – they had another thing coming. And that other thing was Galvatron. After being decimated by Metroplex, Megatron called out for power – more power than he could ever hope to wield. Like Overhaul and the Jungle Planet Cyber Key – the Giant Planet Cyber Key awoke and granted Megatron giant-sized powers and a new form. With the combined might of the Unicron armor and the raw, untapped powers of the Giant Planet Cyber Planet Key coursing through his Spark, Galvatron is now the most powerful Decepticon there ever was. He’s so powerful that he destroyed, single-handedly, an entire city on the Giant Planet. Now, he didn't just ‘destroy’ it – he turned EVERY building to crystalline dust. Now THAT’s power!