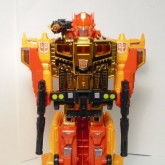 The original, official translation of the bio, included as a part of the set, was rather awkwardly translated:

When the Cybertrons soldier [GRAND MAXIMUS] in space and God Bomber which was made with the whole power of Cybertrons on earth [SUPERGOD-UNITE] as SUPER GINRAI this strongest Cybertrons soldier is born. As a weapon, He has a God Punch which he fires armed armors of his both arms, a God Cannon which he fires big shells in his right shoulder, and so on. But the biggest ability of God Master is the SUPERSOUL power as the origin of human mental energy, especially, the most powerful performance: SUPERSOUL FIRE GUTS, which appears at the climax of GOD GINRAI's spirit, displays the unrivaled power.
He is the ultimate soldier honored with the name of Super God Master.