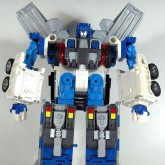 Some of the differences between the RID and CR releases: the CR release has darker blue plastic, different missiles and the lack of Autobot tampo symbols on the sides of the trailer. Also, the voice chip is in Japanese for the CR release, while the RID version is in English.