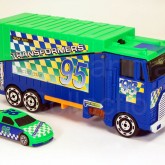 Greasepit never progressed further than hand-painted mock-ups - the samples seen were all hand painted over the top of the Gearhead toy. The Racing Rig was an interesting piece seen at Botcon 96, it would also have featured a cardboard "ring of fire" for Go-Bots to be launched through.

Greasepit would have been the very first instance of a sibling robot being a repaint of his brother had he been released.