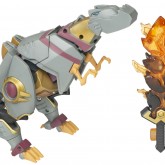 Grimlock and the Dinobots were originally intended to appear in Megatron Rising Part Two, but the animation was unusable so their brief battle with Megatron in this episode was left out (according to Marty Isenberg, the Dinobots would have been easily defeated by Megatron to show how powerful Megatron is.)

Grimlock's first appearance in the Titan UK Transformers Animated stories is in Transformers #17. In this issue he, along with the other Dinobots, comes to the rescue of the Autobots who have been captured in their own base by Starscream and his clones. The Dinobots are easily able to defeat the army of clones and free the Autobots. In return, Grimlock and the Dinobots stay at the Autobot base until the rainstorm passes. Unfortunately, the forecast is for rain, rain, and more rain.

Grimlock appears again in the second issue of the Transformers Animated comic. In this story he is much worse for wear, having been brought to his knees by a rage virus infected Snarl and Swoop. However, Sari is able to heal him with her key.
(It is possible that this story is meant to take place before the story in Transformers #17, as it would partially explain why Grimlock and the other Dinobots were willing to help Sari save the others - they owed Sari one).