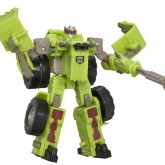 The design team decided that an AUTOBOT construction vehicle would nicely round out this exclusive assortment. GRINDCORE is loosely based on Micromaster Crush-Bull. To complete the AUTOBOT aesthetic, the traditional secondary purple cues were replaced with a rust red color. His name comes from a style of music that aptly fits his personality. - Notes from the Transformers design team

Vos is an actual city from Transformers history! It was a city that was destroyed when relations fell apart with its neighbour Tarn in the Marvel UK annual story State Games, and its destruction was then used by Megatron to swell the ranks of his Decepticon forces. - TFW2005 Notes