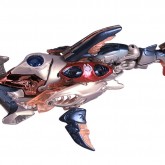 The only aquatic character released in Beast Machines. His bio quote is the same as Cybershark's from Beast Wars, which hints that Hammerstrike might have been meant to be an upgrade for the aquatic Maximal, who was also a hammerhead shark in his initial form.