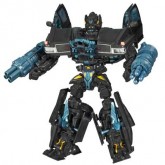 In the UK comics, Ironhide's background is fleshed out a little. In Prelude: Ironhide, we see Ironhide's background as a leader of a team of Autobots, rescuing Longview from a Decepticon held fort. In the same issue, we find out that, separated from the other Autobots and making his way through space, Ironhide was drawn aboard a vast alien ship and probed because the giant aliens on board sensed some connection in him to the Allspark. Except, as it turned out, it was all an illusion. A group of alien scavengers had found the ship and a device keyed to the Allspark's energy signature, and had been tracking the Allspark, plotting to abuse its power like Megatron. Ironhide confiscated the device and left the ship.
Later he arrived on a world that was alive and consuming Jazz, and successfully rescued his Autobot comrade.

In issues 7 and 8, we see what Ironhide was doing following the final battle at Mission City. In #7, he fought the Decepticons again, after they had been revived by Starscream. However the manner of their revival was crude, and made it easy for Ironhide, Optimus and Ratchet to finish off the Decepticons a second time.
In #8, Ironhide met a group of human special forces agents and headed out into the desert to track down and eliminate Scorponok as a part of a cleanup operation. Disappointed that Lennox was not there, Ironhide took point, but underestimated Scorponok, who displayed a new talent - he could latch onto larger Transformers and take control of their bodies! However, Scorponok also made a mistake in thinking Ironhide was the biggest threat, and the special forces managed to sever his connection with Ironhide, allowing Ironhide to put an end to Scorponok once and for all.

During the alternate universe story "Twilight's Last Gleaming", Ironhide is fighting alongside Ratchet to bring down the Decepticons. Their target is a Cybertronian tower which presumably needs to be destroyed before Arcee's team of Autobots on Earth's moon can go on the offensive and help liberate Earth from Decepticon control.