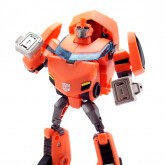 Although referred to as "Cybertron Mode Ironhide", no Earth mode Ironhide officially exists in Transformers Animated. However, the Allspark Almanac Volume 2 reveals that had the series continued, Ironhide would have made it to Earth and adopted an Earth mode which would have given him a robot mode best described as a cross between his Generation 1 form and his movie universe counterpart.